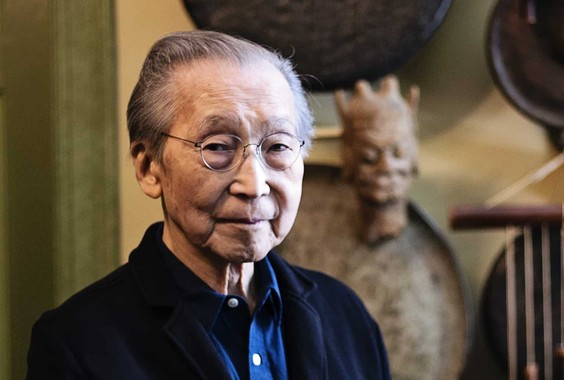 The Department of Music notes with sadness the passing, at the age of 96, of the eminent Chinese-American composer Chou Wen-chung (b. Yantai, China, June 29, 1923; d. New York City, October 25, 2019). We extend our condolences to his family and express gratitude for a remarkable life well lived.

Professor Chou emigrated in 1946 to the United States in the midst of political upheavals in China. He studied composition with Nicolas Slonimsky at the New England Conservatory, Otto Luening at Columbia University, and, most significantly, in private with Edgard Varèse. He became Varèse’s assistant and, following Varèse’s death, curator of his musical estate. He bought and lived with his family in the Varèse Greenwich Village home, filled with magnificent memorabilia from both Varèse and China.

Professor Chou began his teaching career at Columbia in 1954 in the nascent Electronic Music Center. He served on the composition faculty from 1964 until his retirement in 1991. He helped create the doctorate in music composition and served as vice-chair of the School of the Arts. In 1978, he founded the US-China Arts Exchange, which brought Western artists to China and Chinese musicians to the United States. Following the Cultural Revolution, some of China’s most gifted young composers came to study with him at Columbia, including Chen Yi, Zhou Long, Bright Sheng, and Tan Dun. For these and many other students, he was a model for how to integrate Eastern and Western traditions. In 1984 he became the Fritz Reiner Professor of Musical Composition. Outside of Columbia, he played a major role in institutions that supported contemporary American music.

Professor Chou’s highly original music seamlessly blends traditions from East and West. His Chinese sensibility shows most obviously in his elegant percussion writing, for instance in Echoes from the Gorge. But in much of his music, as in the two string quartets, the Chinese aspect is sublimated into the Western tradition through subtle symmetries and contrapuntal lines. He was an expert calligrapher and said that this activity influenced his compositional style. All of his music is intensely expressive yet perfectly balanced.