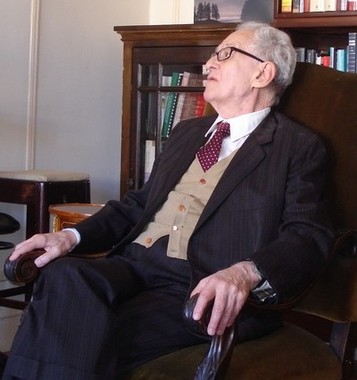 The Department of Music notes with sadness the passing of renowned pianist, composer, and conductor Jacques-Louis Monod (b. Asnières-sur-Seine, France, February 25, 1927; d. Toulouse, France, September 21, 2020). He was a champion of new music, and his contributions to the Department and Columbia are still felt to this day.

Monod began music studies at the Paris Conservatoire at age 8, studying under Yves Nat, Olivier Messiaen, and René Leibowitz. Monod followed Leibowitz to New York in 1951, studying composition at Juilliard with Bernard Wagenaar and conducting at Columbia with Rudolf Thomas. He was active in the new music scenes in New York and London for the next many years, playing and conducting premieres of works for both American and European audiences. A champion of the Second Viennese School, Monod put on the first-ever all-Webern concert while in his studies at Juilliard. Scott Gleason (GSAS '13), in his Grove Music online article on Monod, writes that he was a major contributor to the idea of contemporary music as an academic and uptown, yet international, style, and was the image of a serious music intellectual.

Monod received his DMA from Columbia in 1975 with a dissertation on his work Cantus contra cantum II. Monod proceeded to teach in the Department periodically from 1975 through 1990; he taught courses in ear training, counterpoint, analysis, and orchestration and was instrumental in designing a curriculum that the Department still uses to this day. Also in 1975, Monod founded two organizations for the promotion of new music—the Association for the Promotion of New Music, and the Guild of Composers. The Guild often put on new music concerts at Columbia University's MacMillan Theater, now known as Miller Theatre. In addition to teaching at Columbia, Monod also taught at Barnard, New England Conservatory, Princeton and Harvard Universities, Hunter and Queens colleges, Juilliard, and CUNY.

He was held in high regard by his students and fellow professors. Professor Emeritus Fred Lerdahl describes him as an extraordinary musician, conductor, and educator who held everyone around him (including himself) to the highest of standards. Straightforward, charming, and combative, he was an inspiration to many students; he brought out their best by expecting only the best. In the photo below, Professor Lerdahl presents the essence of their relationship. "He is telling a story with gusto, no doubt punctuated by witty asides, and I am listening with pleasure and affection."  Dr. Peter Schubert (GSAS '88) describes Monod as an eternal source of bon mots. Upon coming to Columbia, Monod gave an ear training test to all of the students. He went from class to class playing intervals; when the results were less than spectacular, he chastised the students, saying, "And you call yourselves musiciens!" The students, chastened, headed to the chair's office and demanded an ear training course. The Department has had an ear training sequence to this day.

Jacques-Louis Monod's most important works are his cycle Cantus contra cantum. The work expands the ideas of polyphony from note-against-note to voice-against-voice. In addition to Cantus contra cantum, Monod wrote other serialist works for solo and chamber ensemble, orchestra, and two chamber cantatas. For more information on his compositions, please read his Grove entry. For more information about the man, please read his obituaries in the New York Times and the Washington Post.

Thank you to Scott Gleason, Alfred Lerdahl, and Peter Schubert for their help in writing this obituary.